Two years after the first stage of reconstruction, the high hall area dating from 1878 was renovated in summer 2020. Until recently, it was a room-sized stage, which served for several decades for festive purposes and performances. Behind it are room-high round arched windows, which line the room in their three-sided symmetrical arrangement. These had to be exposed in order to allow the room to be flooded with daylight in its original form.

The ceiling was divided into three parts by two parallel beams, which resulted in a one-sided alignment. Martin suggested dividing these into nine symmetrical ceiling sections by two further beams running at right angles to them, in each of which a square ceiling chandelier was placed in the middle for basic lighting. This was a great addition for the rhythm and harmony of the room.

To underline the height and festive character of the room, Martin designed four chandeliers made of pure glass champagne bottles. With a diameter of 2 metres each and a total of 240 bottles, these now adorn the cross points of the ceiling beams and give the hall an unmistakable festive character. When dimmed, the chandeliers even seem to float.

The chandeliers as well as the ceiling lights are separately switchable and dimmable (DALI), so that it can be reacted to different room usages. 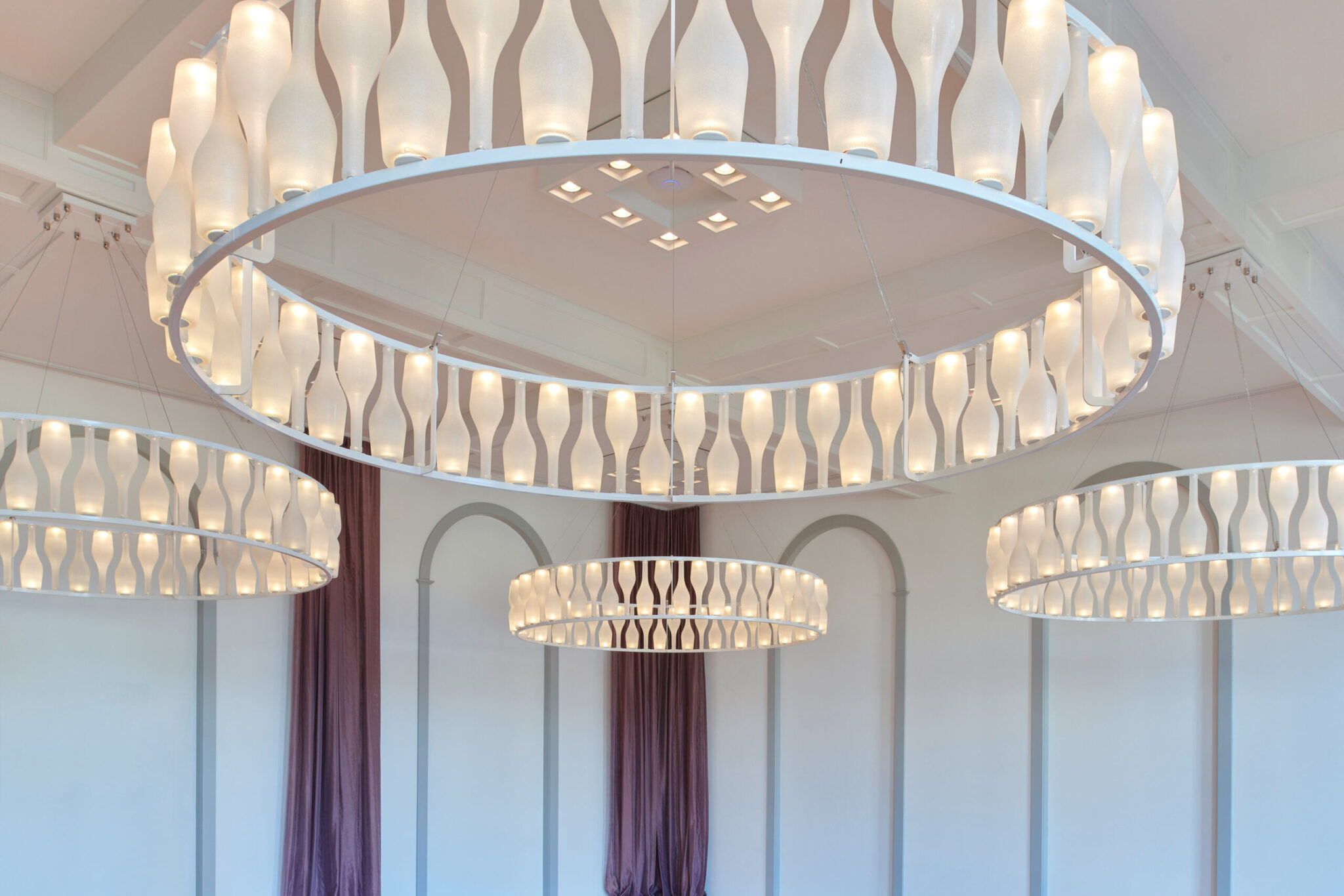 Martin designed and constructed the chandelier within only three weeks and completed four pieces, consisting of two steel hoops lying parallel on top of each other, during five further weeks with great commitment. In addition to bending, drilling and welding, the work also included sandblasting the 240 champagne bottles and electrification of the 60 light sources each.

With this project he was able to expand his great interest in design, construction and handicraft once again. The planning of the interior design merged seamlessly with the product design of the chandeliers. 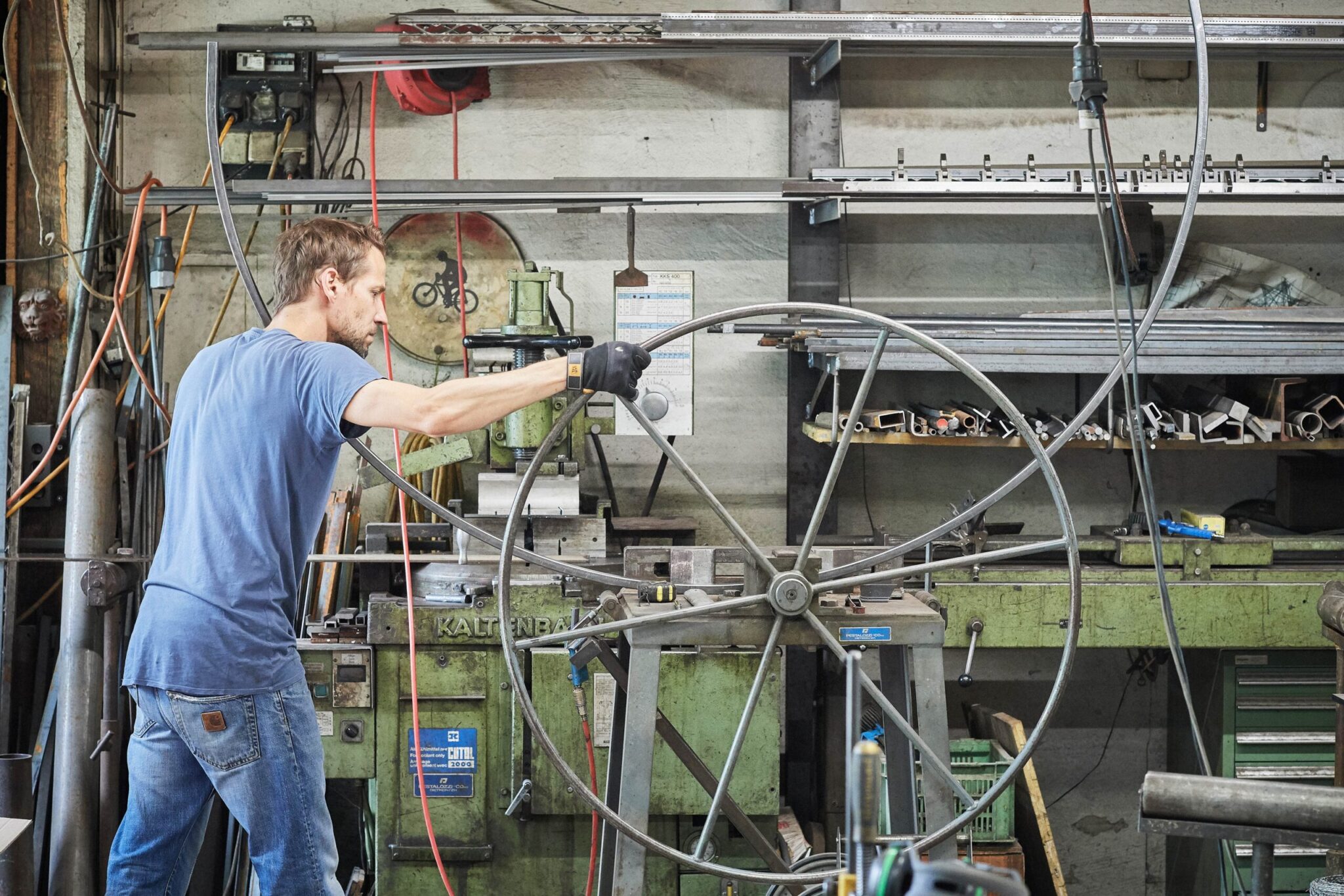 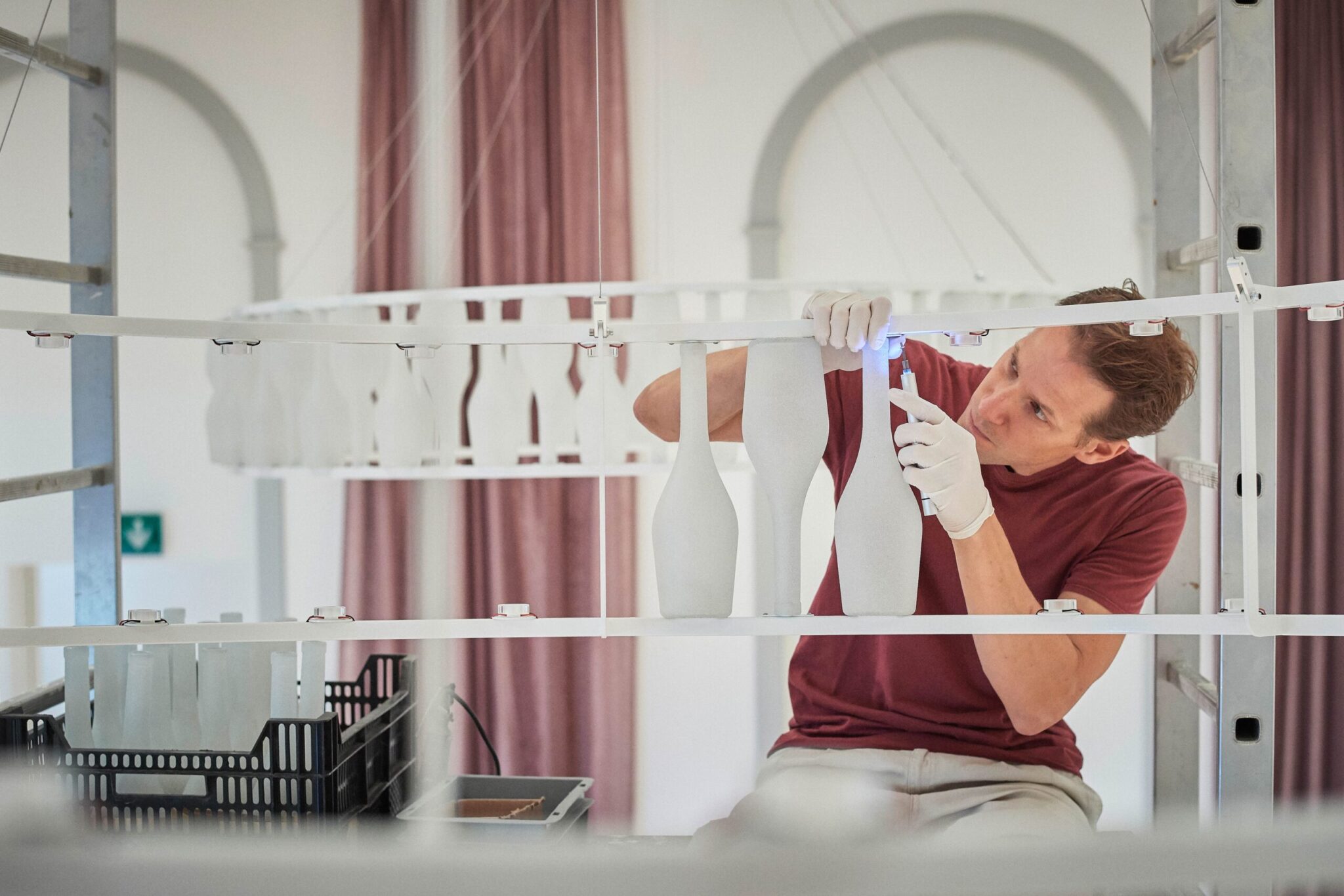 The stately timber-framed building in the centre of the village was erected in 1720 and supplemented in 1878 by a hall extension. Since then, local guilds and innkeepers have owned “Löwen”. The entrepreneur couple Joelle Apter and Michael von Arx, who took over the inn in 2018, continues this tradition.

From then on the premises have been rebuilt in stages and adapted to current needs. Martin planned the new lighting and supported the owner couple in designing the interior architecture. A strong local team of craftsmen supported the ongoing planning process.

The interior of the restaurant area was retained to a great extent, but lighting and technical infrastructure were brought up to the latest standards. In the basement as well as on the first floor, supporting structures were exposed and used as structuring and design elements.

The listed façade also shines in a new festive lighting in the evening. The lens spotlights developed by Martin, which are positioned in each window reveal of the main façade, enable lighting that blends harmoniously into the village scene without any light pollution. 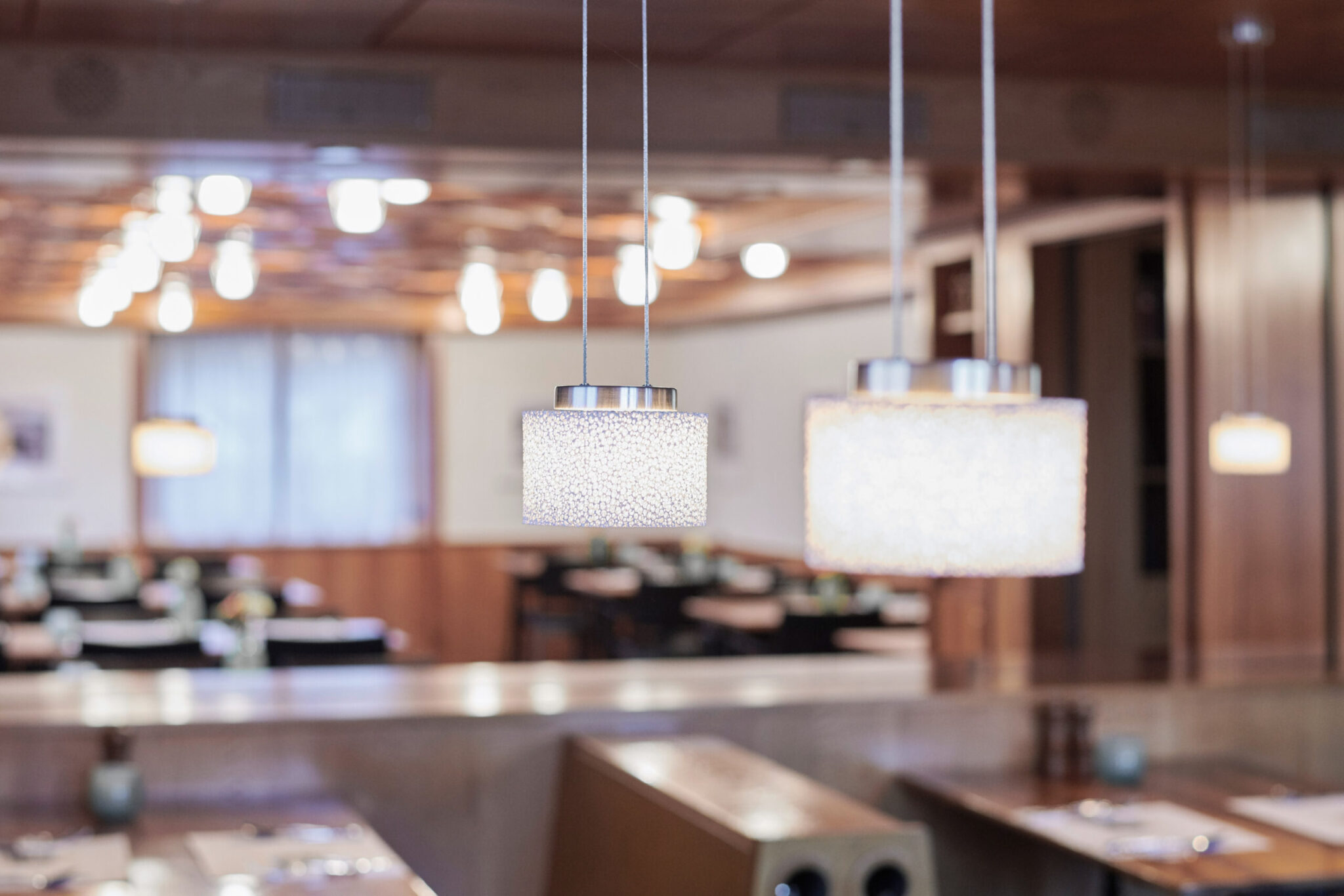 The low hall area (2.1 m room height) was stripped of its dark brown ceiling and wall panelling, whereby the load-bearing wooden beams became a space-shaping element. Martin suggested dividing the resulting linear alignment of the beams with lighting elements, on the one hand to maintain the height of the room, on the other hand to give rhythm to the ceiling appearance and to achieve uniform illumination of different table arrangements. The wooden housings each contain two infinitely dimmable Soraa down lights, which provide festive banquets and meetings with the highest quality of light. The wall luminaires create a sense of depth by directing the eye to the brightest surfaces at the opposite end of the room when entering the room. 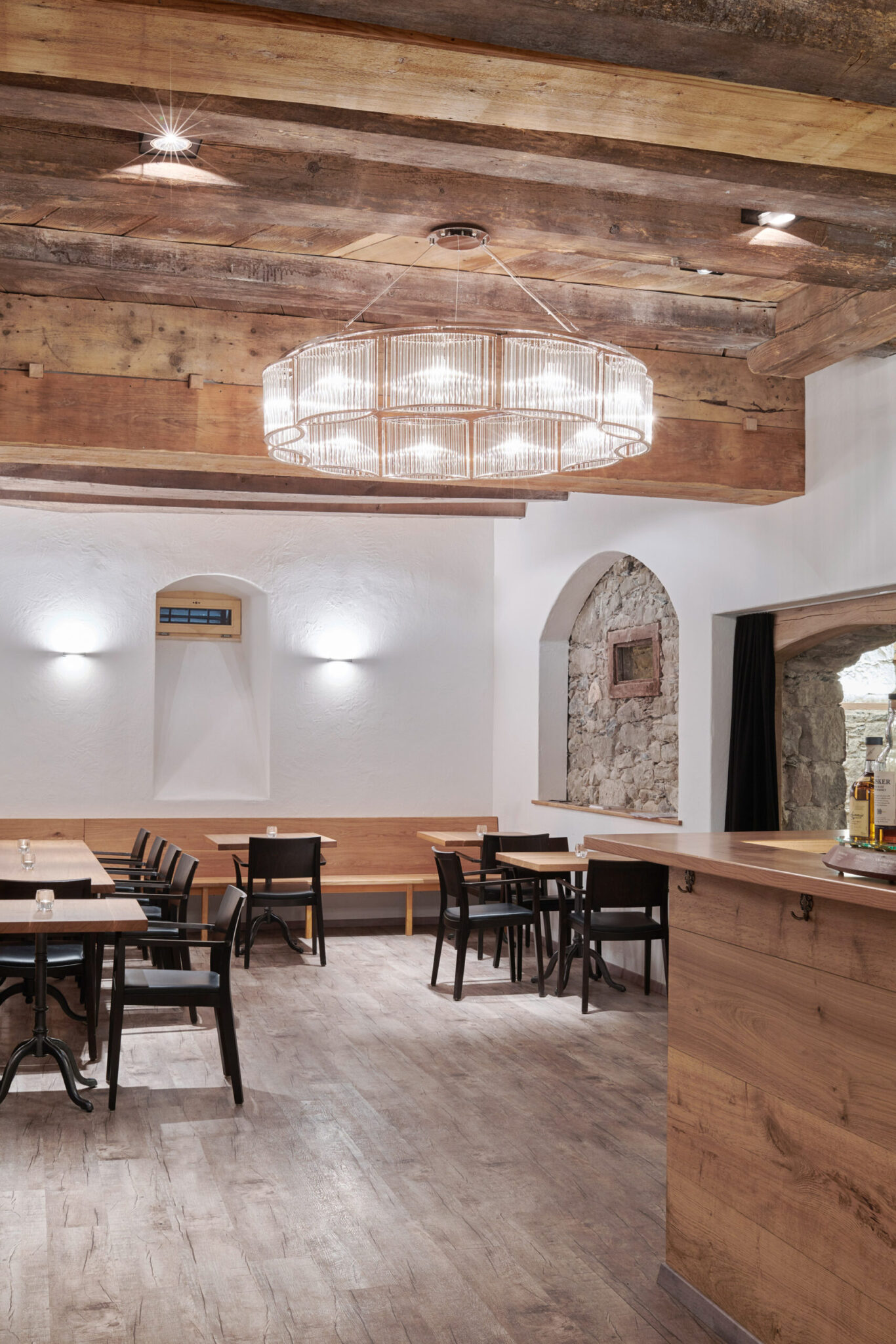 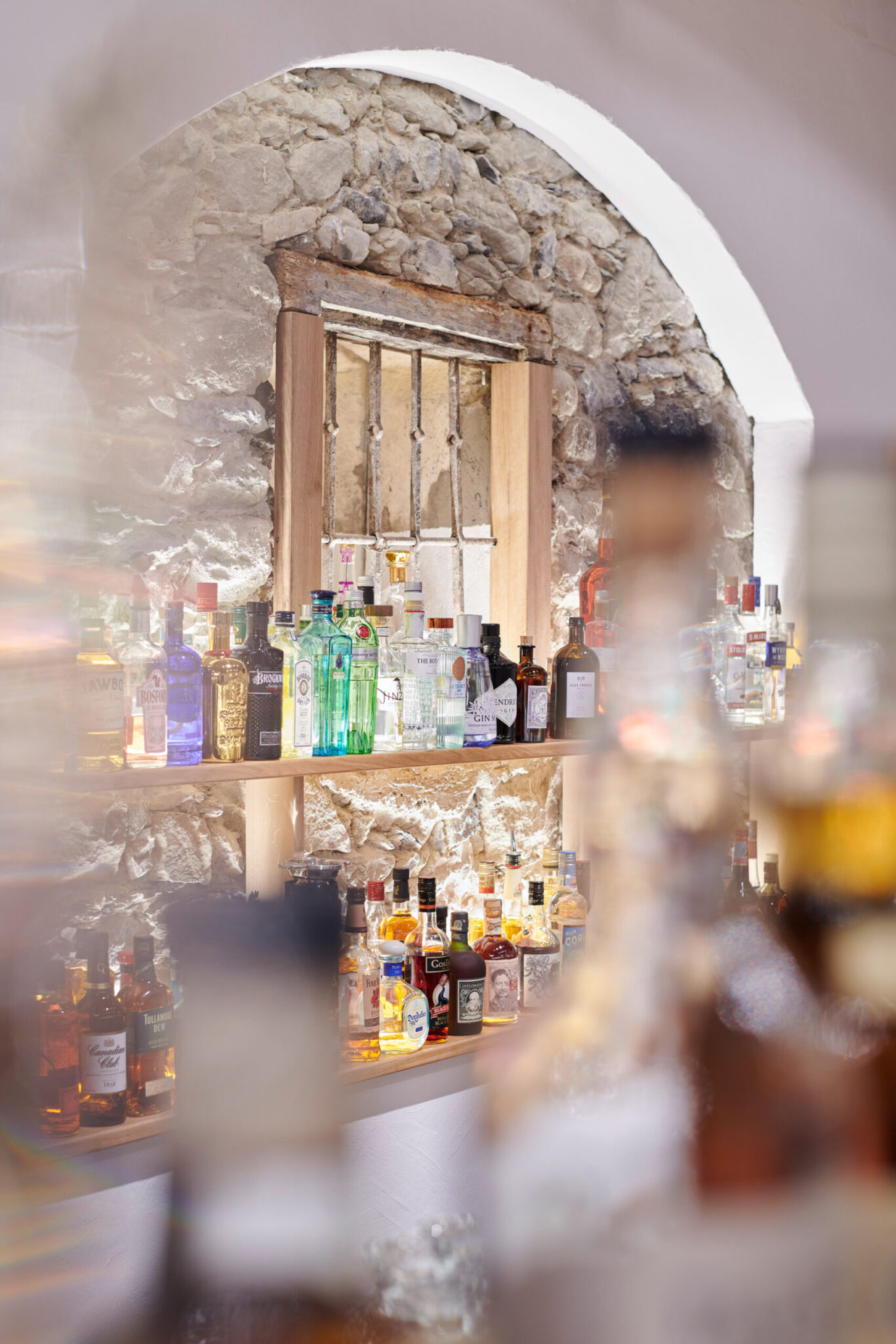 In the bar area, which also needed a complete restoration, a large chandelier now guides the visitor’s view from the entrance to the centre of the room. Down lights between the parallel beam layers provide direct light and brilliance on glasses and place settings. The wall luminaires with direct/indirect component contribute to the expansion of the room perception in depth and height. The variety of colours of the bottles behind the bar counter were used as a decorative element by means of backlighting.

Unused for decades, the vaulted cellar was transformed after renovation into another jewel of the building. The historic walls were freed from crumbling plaster and supplemented with a new floor, solid oak tables, side seating and a generous wine rack.

In order to maintain a flexible use of space and to emphasise the geometry of the room, special luminaires with a strong indirect component were developed and placed laterally in each yoke. This kept the vaults free of electrical installations. The grazing light also highlights the lively structure of the stones. The lamp housings were made of wood to match the furniture